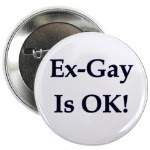 The Matter (& Anti-Matter) of Sexual Politics

The Matter (& Anti-Matter) of Sexual Politics
by
Paul E. Rondeau "Born gay, forever gay" are two halves of the keystone to all gay political rhetoric. Although still not supported by science after 30 years of research, demands for all sorts of gay friendly legislation rests solely on keeping the government and you believing that homosexuality is innate like race or gender.
Demands for "gay rights" perches precariously on a false ledge. Only as long as the public believes that homosexuality is the same as race or gender will the ledge hold. Repeated often enough and loudly enough without evidence or voices to the contrary, political correctness will carry the day.

Gay proponents must keep ex-gays in the national closet or portray ex-gays as self-deluded and mentally ill. Like matter and anti-matter, political physics states that gays and ex-gays cannot coexist in the same political space.


The resulting big bang would be political ruination of the gay quest for protected class status, mainstreaming homosexuality in K-12 schools, and rewriting the meaning of family and marriage.

Public knowledge that ex-gays even exist is an immense threat.  Not just geneticists, biologists, and anthropologists would quickly smell something fishy. The political jig is up for gay activism if too many average Americans start asking, "Why are there ex-gays but no ex-Blacks, ex-Latinos, or ex-Native Americans?"

Obviously, there is no answer from science--other than political science.  And that is why gay activists and their politically correct advocates aggressively work to deny ex-gays the right to even exist.
How tolerant of them.
Posted by Unknown at 1/23/2010 11:53:00 AM No comments: Links to this post