SCOTUS and DOMA: Not enough rights to go around 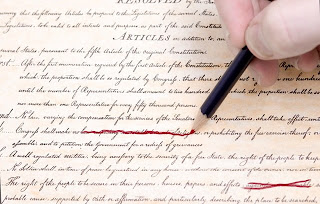 In order to satisfy the cultural fashion of the moment, the Supreme Court of the United States is once again creating a new “landmark” right that subordinates universal constitutional rights. In its ruling on a suit to overturn the federal Defense of Marriage Act, United States v. Windsor, the Court ruled that the federal government must recognize a foreign (Canadian) marriage of a lesbian couple from New York, which allows same-sex marriage.

In a second ruling, Hollingsworth v. Perry, SCOTUS declared that the parties defending Proposition 8 — a constitutional amendment by California voters codifying marriage as between one man and one woman — had no standing to do so.

Pro-gay California governor, Jerry Brown, refused to defend activist challenges to Proposition 8. This set up the “no-standing” loss. SCOTUS decided that if the California government was unwilling to defend its own laws, this amounted to a de facto default that now nullifies the votes and will of California’s own citizens.  Man/man and woman/woman marriages will now resume in California.

Likewise, President Obama swore to uphold our laws but “evolved” on homosexuality. Without another election to restrain him, Obama is totally out of the closet: His Department of Justice informed the Supreme Court that it would not act to defend DOMA, a law overwhelimingly passed by Congress and signed by President Clinton. That leaves the U.S. House of Representatives to step in.

Some see these rulings as the Roe v. Wade of the homosexual cause. Consider the comparison.

The right for a mother to kill her unborn child is also nowhere to be found in the Constitution. In 1973, it was accepted by the Supreme Court majority in Roe v. Wade drawing upon the earlier 1965 contraceptive case Griswold v. Connecticut. Time magazine described the ruling as “a judicial free-for-all that produced six opinions and a shaky new ‘right of privacy’ concept that is bound to baffle judges for many more years.”

To create this new right to abortion for women, the Court had to take away the 14th Amendment rights of all unborn human beings: “Nor shall any state deprive any person of life, liberty, or property, without due process of law; nor deny to any person within its jurisdiction the equal protection of the laws.”

If abortion advocates did not know in 1973 that they were unleashing partial birth abortion, post-birth infanticide and abortion industry houses of horror like Gosnell in Philadelphia, Alexander in Michigan, Karpen in Houston, Planned Parenthood in Delaware, and others across the nation, they certainly knew that they were fighting to replace an unborn baby’s right to life for someone else’s right “to choose.”

The 14th Amendment was intended by our Founding Fathers to obligate our government to equal protection of every human being, but activists twisted it to enable over 55 million unborn persons to be put to death by surgical abortion in the 40 years since Roe.

Now, the 14th Amendment is being used to put the 1st Amendment rights of freedom of religion, association and speech in harm’s way. Any “right” to same-sex marriage must undercut universal constitutional rights: It may have far less to do with “love” than the legal power to subjugate.

Dana Loesch at RedState.com compiled some quick examples: Elane Photography in New Mexico declined same-sex wedding photography work, citing the owners’ Christian faith. They were sued and ordered to pay $6,600 in attorney fees. An employee of Allstate insurance wrote an essay online disagreeing with same-sex marriage and was reportedly fired from his job as a result.

A Methodist church in New Jersey was sued and lost, for not offering its facility for same-sex weddings. Catholic Charities was barred from assisting in adoptions to anyone in Massachusetts, the District of Columbia and Illinois because it declined to consider same-sex couples.

“This government is acknowledged by all, to be one of enumerated powers,” stated Chief Justice Marshall in McCulloch v. Maryland. America is also a nation of enumerated rights intended for “We the people,” not only the people in current favor by politicians or courts.

When politicians and black robes diminish constitutionally enumerated rights for all in order to conjure rights for the select, only one result is possible: Not enough rights to go around.