"Gay marriage": Can freedom of speech, religion, and press survive? 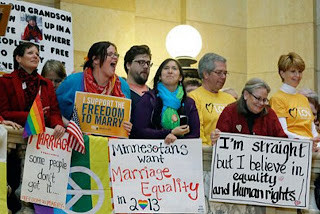 Concepts like gay rights, sexual minority, and homophobia currently saturate our culture and permeate our schools. These terms illustrate the success of pro-gay activists in generating politicized science and exploiting social psychology.

The Supreme Court of the United States is now considering whether to override First Amendment rights in order to meet the demands of gay activists for so-called “marriage equality.”

Homosexual marriage can only become reality if the Court discards our specified constitutional rights in favor of some alleged right that doesn’t exist, yet is claimed by gay activists. Even use of the term “rights” frames the discussion with a false premise: Homosexuals are either entitled to or are being deprived of something.
But, there is no such thing as the right for men to marry men or women to marry women, just as underage minors may not marry, parents may not marry their children, and siblings may not marry each other.  Neither can a person marry more than one person at a time or marry inanimate objects or animals.

Same-sex marriage is not about equality; it is about power. It is not about truth or the right to love or taxes or legal benefits. It is not about redefining or expanding marriage, but undoing it. It is about gaining the full force of law to silence dissent and require conformance and validation by every citizen.

Unholy alliance
“In February 1988, a ‘war conference’ of 175 leading gay activists, representing organizations from across the land, convened in Warrenton, Virginia, (near Washington, D.C.) to establish a four-point agenda for the gay movement,” say Harvard-trained social scientists and homosexual activists Marshall Kirk and Hunter Madsen in their book “After the Ball: How America will overcome its fear & hatred of Gays in the 90’s.”

In that book, they proposed “[d]ismissing the movement’s outworn [civil rights] techniques in favor of carefully calculated public relations propaganda.” We now see the results of that ongoing propaganda playing out today.

One menacing focus of the campaign is religious freedom, where people who resist homosexual mainstreaming based on faith are seen as “religious homohaters.” Kirk and Madsen describe the strategy:

“Most contemporary hate groups on the Religious Right will bitterly resent the implied connection between homohatred and Nazi fascism. But since they can’t defend the latter, they’ll end up having to distance themselves by insisting that they would never go to such extremes. Such declarations of civility toward gays, of course, set our worst detractors on the slippery slope toward recognition of fundamental gay rights. …

“[Furthermore] gays can undermine the moral authority of homohating churches over less fervent adherents by portraying … [them] as antiquated backwaters, badly out of step … with the latest findings of psychology. Against the atavistic tug of Old Time Religion one must set the mightier pull of science and public opinion. … Such an “unholy” alliance has already worked well in America against the churches, on such topics as divorce and abortion. … [T]hat alliance can work for gays.”

The attack is not limited to the faithful. Kirk and Madsen describe a war against individual freedoms, academia, and media that is justfiably described as psychological terrorism.  Its intent is to not only “jam” free speech but free thought.

“[T]he bigot need not actually be made to believe … that others will now despise him … [r]ather, our effect is achieved without reference to facts, logic, or proof. … [W]hether he is conscious of the attack or not. Indeed, the more he [the bigot] is distracted by any incidental, even specious, surface arguments, the less conscious he’ll be of the true nature of the process—which is all to the good … conversion of the average American’s emotions, mind, and will [is accomplished] through a planned psychological attack, in the form of propaganda fed to the nation via the media.”

This is why Hollywood and the mainstream media portray gays as good citizens and neighbors and “anti-gay” Christians and social conservatives as extremist, homophobic, bigoted, ignorant, and hateful. In short, the message is that gays are victims and Christians are victimizers.

The news profession plays its part through control of information by selection and omission without revealing its true purpose — a tactic essential to the propagandist.

Pro-family organizations like Focus on the Family, Family Research Council, and the National Organization for Marriage are routinely branded as hate groups by gay proxies such as the Southern Poverty Law Center (SPLC) and hate-slinging media like the Daily Kos.

Mainstream media then picks up such stories and reports the “controversy.” Whose controversy?

The 1998 death in Kansas of a homosexual 21-year-old, Matthew Shepard, spawned 80 pro-gay stories at the Washington Post but nary a mention about the death in Arkansas of 13-year-old Jesse Dirkhising only months later. Two homosexual men drugged the child, bound him naked, and raped him repeatedly during a marathon torture session.

When asked why the difference, the paper responded that Shepard was a national story, Dirkhising just a local crime. It then criticized conservative media “hostile to homosexuals” for questioning the disparity in coverage.

Even people like Bill O’Reilly, a Catholic, are falling victim to the propaganda, dismissing opponents of gay marriage as Bible thumpers. With such a bias permeating the airwaves and this administration, our enumerated First Amendment rights are on the defensive.

Michael Warren, author of “Seeing Through the Media,” described the results we see today: “It is not raw overt coercion; it is one group’s covert orchestration of compliance by another group through structuring the consciousness of the second group.”

So, if you avoid saying homosexual instead of gay; if you hesitate to disagree on same-sex marriage in public; if you stay silent at work or school when friends or coworkers promote gay pride or the Day of Silence; if you fear criticism for stating the truth that science does not prove that homosexuality is the same as race or gender — think about what you have just read.

And this is all before gay marriage is law.