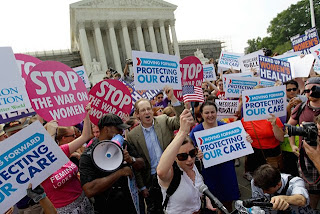 Today, the time for public comments on Obamacare closed. White House shenanigans do not change the fact that the Affordable Care Act, Obamacare, still mandates “free” coverage of contraceptive, sterilization, and abortion producing drugs that pose medical risks and are triggered by and therefor linked directly to employer-provided health insurance.

The latest faux accommodation is that a “free” insurance policy must automatically be issued for all employees of organizations exempt from providing these items and procedures. It magically is paid for by the insurance company so the religious employers and employees are not supposed to complain. This is sheer nonsense: No amount of bookkeeping sleight of hand changes the cause-effect relationship.


HHS is attempting to mandate that persons and employers of conscience participate in behavior they find morally objectionable via their insurance premiums, premiums the government mandates they must have in the first place. This directly infringes upon religious freedom and is an offense to conscience of the majority of Americans.

Not safe as advertised

Beyond religious, moral and other conscience objections, the contraceptive, sterilization, and abortifacient drugs mandated are not “safe” as advertised. They put our children and loved ones at higher medical risk.

Large documented studies in France and by the United Nations link the potential for hormone disruptive chemicals to life-threatening venous thromboembolism (blood clots), infertility, the development of non-descended testes in young males, breast cancer in women, prostate cancer in men, developmental effects on the nervous system in children, attention deficit/hyperactivity in children, and thyroid cancer.


These are the drugs that Obamacare mandates as free, and which our own children are automatially entitled to receive without parental knowledge before, during, or after.

Obamacare deliberately deceives America. Never in history has the government required that citizen consumers not be told under penalty of law what they are buying — except when it comes to Obamacare and abortion.

Obamacare conceals a mandate in Sec. 1303 that requires Americans to contribute $1 billion or more to an elective abortion superfund via their insurance premiums. While President Obama stomps the countryside calling for protecting consumers from all types of evil predators, he forbids employers from informing employees if their insurance includes abortion coverage — which in turn triggers “at least $1 per month” from every policy for the hidden elective abortions superfund. Moreover, parents will never know if their own minor children use these “services.”

It is appalling that the Executive Branch conspired to circumvent the law and will of the people and deceive citizens by forcing taxpayers to sureptitiously fund what Congress has proscribed in the Hyde Amendment: the federal funding of abortion. It is estimated that this fund can triple the number of abortions in the United States.


The latest revised definition of “religious employer” still subjects the majority of organizations and American citizens who are undeniably religious to the intrusion of current government ideology at the expense of the timeless principles of individual liberty enshrined in the Bill of Rights. (Not to mention the Religious Freedom Restoration Act and the Administrative Procedure Act.)

Proponents of the bill argue with a straight face that the Constitution limits practice of religion to the individual within his home, place of worship, or religiously identified organization. That is enough horse droppings to fertilize all the cornfields in Nebraska.

We have a president who believes Americans are so stupid or indifferent that they will not see that he has elevated his personal ideology over their liberty and safety. All Americans, and especially our daughters, mothers, and sisters, will pay the price.