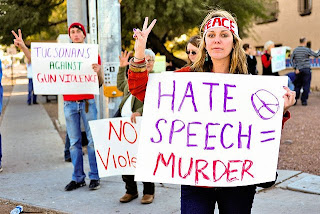 The Ku Klux Klan, Aryan Brotherhood, and American Nazi Party are the old haters: They tend to get shot a lot, lose limbs, or end up in prison.  Those groups are lucky if they have a strip mall office in what used to be a failed shoe store.

The new hate industry has big shiny buildings, richly paid executives, lots of staff, fancy public relations firms, tons of positive media headlines, and hundreds of millions of dollars — sometimes billions — in annual revenue. They are invited into and appointed to offices on-high in government, schools, and law enforcement.

Today’s hate industry does not make itself conspicuous by burning crosses, conducting lynchings, or orchestrating bombings—at least not in the traditional sense. Today’s hate industry is based on labeling others as haters. That’s where the profit is, whether that means money, power, or (usually) both.

Hate-labeling is flourishing within the halls of government and the self-anointed media; it’s encouraged at the highest levels, by President Barack Obama himself.

The target is not violent people intent on hurting fellow citizens or blowing up the government, but instead those who are pro-family, pro-faith, pro-life — anyone who has pro-American values. Clever marketing schemes like “war on women,” the “one per-centers,” and not doing “your fair share” mask the true nature of the underlying hate campaign. Other hate cards include words like homophobic, tolerance, extreme, and ignorant.


When husband Barack was elected, Michelle Obama said she was proud of the United States for “the first time in my life.” Does her husband share that sentiment?

We know that Obama sat in the same church for 20 years, attending a congregation where the incendiary sermons of Rev. Jeremiah Wright — the pastor who officiated Obama’s wedding — preached black nationalism, liberation theology, and condemned the America that brought 9/11 itself with its own “terrorism.” As Wright recently said, “You don’t change who you are because of where you are.”

We also know that hate and fear-mongering at the top, like other excrement, flow downhill.

LifeSiteNews reports that “a series of reports from the Department of Homeland Security and West Point, as well as a training seminar for FBI agents, have depicted pro-life Christians as the most likely source of domestic terrorism. A number of pro-lifers believe the Obama administration is attempting to gather intelligence on the pro-life movement.”

Maybe that’s why Major Nidal Malik Hasan — a Muslim who had e-mail contacts with terrorist Anwar al-Awlaki — can kill 13 people at Ft. Hood while shouting “God is great” in Arabic, plead guilty, and still have the shooting classified only as workplace violence.

As insiders know in Washington, “Personnel is policy.” So what can Obama appointees tell us?
Eric Holder’s Department of Justice dropped voter intimidation charges against the New Black Panther Party because the victims were white. Chief Diversity Officer of the Federal Communications Commission, Mark Lloyd — a former George Soros employee — reportedly said that the “purpose of free speech is warped to protect global corporations and block rules that would promote democratic governance.”

Kevin Jennings, cofounder and executive director of the Gay, Lesbian, and Straight Education Network (GLSEN) — an organization that fights “institutionalized heterosexism” and sponsored the shocking Fistgate scandal — was named as Obama’s safe school czar. Safe for homosexuality, but certainly not freedom of speech or religion.

Obama personally selected former Kansas governor Kathleen Sebelius to head up Health and Human Services, the epicenter of Obamacare. She is so militantly pro-abortion that her Catholic bishop banned her from receiving Holy Communion — an extraordinary action dictated by Canon 915 that is (too) rarely employed.

As governor, Sebelius’ administration shredded all key evidence in an ongoing felony case against Planned Parenthood and famous late-term abortionist George Tiller. The documents confirmed “164 cases of underage rape or statutory rape went unreported and [thus could not be] investigated by authorities.” With the evidence destroyed, both Sebelius and PP walked away with all charges dropped.

Progress? Progressive? To where?

This is not just politics. Sooner or later, the government and the people start to believe such propaganda — and act on it. Like tyrants, they justify their criminal actions as for the greater good.
The Southern Poverty Law Center, once a legitimate civil rights organization, now lists groups that oppose homosexual marriage — groups such as Family Research Council  and American Family Association — as hate groups alongside white nationalists, Neo-Nazis, and skinheads. SPLC scares hundreds of millions of dollars from “trembling liberals aghast at … lurid depictions of hate-sodden America,” reports Charlotte Allen at The Weekly Standard. SPLC headquarters is so lavish it was dubbed “Poverty Palace.” Recently, a gay rights gunman targeted FRC after finding it on the SPLC hate list.

Tammy Bruce, an unapologetic self-described lesbian feminist, issues this warning in her book The New Thought Police: “Our freedom to speak our minds is under attack … powerful special interest groups on the Left are mounting a withering assault on our rights in the name of ‘social equality.’”

Well, that certainly qualifies as “fundamentally transforming the United States of America.”